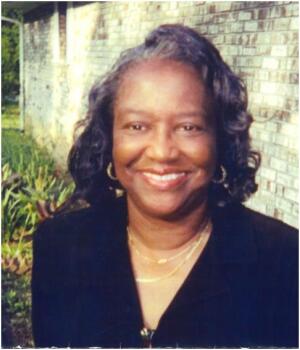 Shirley Shelton is the tenth of twelve children born to sharecroppers, Ruben and Lizzie Wyckoff Glenn from Newsite, Alabama, Tallapoosa County.  In 1959, Shirley graduated from Zana High School in Daviston, Alabama as valedictorian of her class.

Shirley and Abe migrated north in the early 1960’s in search of the opportunities promised from that region of the United States.  They lived in Queens, New York for more than 40 years before moving back to Alexander City, Alabama.    They tried to set the best example for their children, grandchildren and others.

She embarked on a lifelong career of helping youngsters in the community.  For more than 15 years, Shirley was a Girl Scout Troop Leader at St. Clement Pope, Roman Catholic Church.  She spent many hours tutoring and teaching young ladies hygiene, cooking, sewing, basic etiquette as well as taking them on trips.

Shirley attended Syracuse University and received a Master Instructor’s Certificate in Food Service Accountability.  In 1974, she received a Bachelor of Arts Degree from Queens College, Flushing, New York.  Shirley’s career with the New York City Board of Education extended more than 31 years.  She was a paraprofessional at PS 123Q, and approximately 22 years later, she became a New York City Board of Education Office of School Food and Nutrition Service Manager serving numerous schools in District 27Q.

In 1985, Shirley became a member of the National Association of Negro Business and Professional Women’s Clubs, Inc. (NANBPWC, Inc.). As 1st Vice President, she spearheaded the collection of medical, school supplies and sneakers and sent them  to a village in the Ashanti region of Africa.  In 1999, Shirley re-located to Alexander City, Alabama.  She founded the Central Alabama Club (CAC) of the NANBPWC Inc., and was elected President, a position she held until she received her wings and was called to heaven.  The CAC has been responsible for many scholarships given to the youth of Alabama to attend college.  Each year, this national organization hosts a National Convention.  Shirley has received many awards including the Sojourner Truth Award.  As a member of the Perfect Peace Missionary Baptist Church, Shirley was appointed as the Financial Committee Chairperson.  She was so loved by the church members that they will be dedicating the Kitchen to her.  It will be called “Shirley’s Kitchen”.

Shirley was a world traveler.  She has passed through or spent time in 40 of the 50 U.S. States, including Hawaii and Alaska.  She has also traveled to Canada, Mexico, Germany, Spain, France, the Bahamas and she has been on several Caribbean cruises.  She has spent time in Martha’s Vineyard with her family and friends.  Shirley also sponsored a bus trip from Alexander City, Alabama to Martha’s Vineyard.  A joyous time was had by all.

In the summer of 2022, Shirley co-hosted and attended a family reunion in Virginia Beach, VA. and the following week went on  a Caribbean cruise with her two remaining children and  grandchildren.

Shirley moved to be next door to her sister-in-law, Laura Shelton Carr.  Shirley did have some health issues and even though they are the same age, Laura took care of Shirley as she did her brother Abe before he passed.  Laura was more like a sister to Shirley than a sister-in-law and she loved her dearly.

To send flowers to the family or plant a tree in memory of Shirley A. (Glenn) Shelton, please visit our floral store.

A Memorial Tree was planted for Shirley

Join in honoring their life - plant a memorial tree