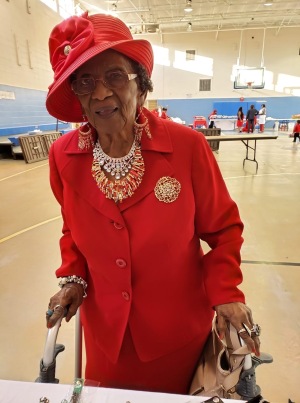 Mother Mary Katherine Gamble Brooks was born on September 22,1927 to the late Henry Gamble and Vida Lampkin-Brooks in Alexander City, Alabama.  On October 17,2020; the angels surrounded Mother Mary K. Brooks and she answered the call to her Lord for her Heavenly Rest at the ripe age of ninety-three years old.

Mother Mary K. Brooks was an Awesome Dresser, who loved her Jewelry, her Lipstick and Nail Polish. Because in her words, “Just because you are feeling bad;   then you don’t have to go looking bad!”

Mother Mary K. Brooks joined the church in 1962 which was The Masonic Hall on Locust Street under the leadership of Apostle W.T. Traylor. She was a Faithful Member of Liberty Life Christian Center.  Mother Mary was the oldest member and one of the Mothers of the Church. She was one of the longest members under Apostle W.T.   Traylor.  Mother Mary served as a Counselor to ALL at Liberty Life Christian Center.     If you were not doing right, then she would let you know about it. Mother Brooks was a faithful churchgoer. Her Testimony was Living and Standing on the Word of GOD!

Mother Mary K. Brooks served Faithfully as the Lead Cook of Special Service Catering Company for twenty-five years, a Cook in the Kitchen at Liberty Life Christian Center, Housekeeper and Childcare Provider for the Carlisle and Spraggins Family.  She also raised and feed several children other than her own of the Community and more. In Her Words, “ If you don’t work then you want have nothing.” She showed us what a great work ethic was.

To send flowers to the family or plant a tree in memory of Mrs. Mary Katherine (Gamble) Brooks, please visit our floral store.