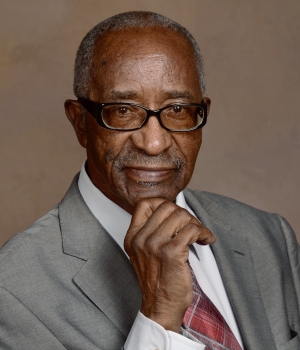 After graduating from the Alexander City Colored High School in 1956, Abe Jr. enlisted in the United States Marine Corps where he trained with the military police at Camp Lejeune, North Carolina, and spent much of his tour of duty traveling to Cuba, Puerto Rico, Spain, Greece, Sicily, and Italy. After leaving active duty in 1958, Abe remained in the U.S. Marine Corps Reserves until he was honorably discharged in 1962.

Abe then began college at Tennessee State University where he was a music major.  He was a participant in the TSU Marching 100 Band and sang in the TSU senior choir.  He also pledged Alpha Phi Alpha, the first Black College Fraternity in the United States. It was this brotherhood that prompted Abe’s active role in the Civil Rights Movement marching with Dr. Martin Luther King Jr. and participating in “sit-ins”.  Abe married his high school sweetheart, Shirley Ann Glenn, in 1959, and after two years at Tennessee State University, Abe moved to New York City where he joined his wife.

While in New York, Abe and Shirley raised four children. Sharrell Haygood (m. Bernard Haygood), the oldest of their children, retired from the District Attorney’s office in Atlanta, GA.  Sherry Harrell (m. Lawrence Harrell), their second daughter who passed away in 2017, was the Vice President of Regions Bank in Montgomery, AL and later managed all four Walmart Woodforest banks in Montgomery, AL. Sheila Shelton, their youngest daughter who passed away in 2016, worked for the Department of the Navy in Virginia Beach, VA. Sean Shelton (m. Nicole Shelton), their only son and youngest child, is a retired New York City Corrections Captain who worked at Riker’s Island.

During his time in New York, Abe worked as a janitor and as a letter carrier and special delivery messenger for the United States Postal Service.  He resumed his college education at Queens College where he continued as a participant in the college band, the choir, and the prestigious Queens College vocal ensemble.  Abe graduated from Queens College and began his teaching career in the New York City Public School System.  He began his career as a classroom teacher, music teacher, and band director. Abe also spent time as the director of the Evening Community Night Center for teenagers at August Martin High School and P.S. 123.  After receiving his master’s degree in education, Abe was promoted to assistant principal, and finally became the principal of P.S. 96 in Queens, New York. In 1995, Abe retired from the New York City Public School system after 32 years of dedicated service.  Soon after, he and his wife returned home to Alexander City, Alabama.

Abe’s love of music was not only evident in his career, he was also invited to perform with the Max Roach Jazz Choir and the Carr-Hill Singers.  His participation in both choral groups afforded him the opportunity to travel to Europe, sing on a recorded compilation entitled “To the Max, with Max Roach and Jazz Choir” and sing in the choral version of the Broadway musical “Porgy and Bess” where he received a standing ovation for his rendition of “It Ain’t Necessarily So.” With his wife, Shirley, Abe was an active member of the National Association of Negro Business and Professional Women’s Clubs Inc.  His role as an ombudsman (President of the “HoneyDo” club) allowed him to continue to play his music at various community events as his wife was the president of the Baisley Park Club NANBPW chapter in New York and the Central Alabama Club chapter in Alabama. He attended the Alexander City Presbyterian Church where he sang tenor in the choir.

As a renaissance man and world traveler, Abe was also an avid tennis player and snow skier.  He was an active member of the American Tennis Association winning numerous trophies and accolades.  He was also a member of the National Brotherhood of Skiers and traveled all over the United States (accompanied by his son Sean Shelton) enjoying his love of the sport.

Abraham’s legacy lives on in his grandchildren.  His oldest granddaughters, Atisha and Latisha Burks, both hold master’s degrees.  Atisha is a Senior Accounting executive with the Navy.  Following in her grandfather’s footsteps, Latisha Burks is a high school teacher and instructional mentor.  Keeyanna Haygood worked for the Atlanta Marta Transportation system for over 8 years.  Keehlan Haygood received his bachelor’s degree in criminal justice and is now working for the Fulton County District Attorney’s Office in Atlanta, Georgia.  His youngest grandchildren, Brianna and Samantha Shelton, both attend Rutgers University where they are studying Veterinary Science and Chemical Engineering respectively.

Abraham Shelton Jr. was preceded in death by his parents, Abraham Shelton Sr. and Laura Lowe Shelton, his great aunt, Luria Lowe, with whom he lived most of his life, two sisters, Willie V. Dubose and Chrisandra Shelton, two daughters, Sheila Shelton and Sherry Harrell, and many Alpha Phi Alpha brothers, friends, and relatives. He is survived by his wife, Shirley Shelton, his siblings: Laura Shelton Carr, Reverend Oress Shelton, Rebecca Hassell, Abber Dean Shelton, Reseda Shelton, Byron Shelton, and Emma Black, his children: Sharrell Haygood (m. Bernard Haygood) and Sean Shelton (m. Nicole Shelton), and his grandchildren: Atisha and Latisha Burks, Keeyanna and Keehlan Haygood, and Brianna and Samantha Shelton, his son-in-law and caregiver, Lawrence Harrell, as well as Abe’s great friend, Walter Coley who picked him up every Wednesday and on Sunday morning for church (prior to COVID) and a host of nieces and nephews.

In lieu of flowers or planting a tree, please donate to the Abraham Shelton Education Fund (paypal.me/teach2all).  As many of you know, Abraham was a lifelong educator and supporter of his alma mater, Tennessee State University as well as the Central Alabama Club, of the National Association of Negro Business and Professional Women’s Clubs, Inc. as an ombudsman. We would greatly appreciate it.